PSG +0.5 at -225 for 6 units. PSG are going to score on this Dortmund defense. That is all I need to know to make this play. PSG’s game against Amiens this past weekend was a wild 4-4 tie. PSG were prolly looking ahead a little bit. Erling Haaland is amazing, but even he looks up to Mbappe. I like PSG’s attack and pace to eat up Dortmund a little. PSG have not lost a game since November 1st. Starting off the Champs League with what I view as a safe bet.

Liverpool/Atletico Madrid over 2 at -149 for 3 units. Life’s too short to bet unders. Atletico’s defense could have looked better against Valencia. Madrid created chances in that 2-2 draw, but couldn’t convert a lot of them. Liverpool needed a 2nd half Mane goal to beat Norwich, but they have already run away with the league. Their focus is on scoring an away goal in Madrid in my opinion.

AGO Esports +1.5 at -150 for 5 units. AGO have been ice cold lately, so they will take at least a map. AGO are pretty filthy on Dust2. Furlan can’t play worse than he did last time against Gambit. The 16 year old F1ku is pretty damn good. He will keep improving. Furlan plays better and Gambit gets a map.  Gambit are the better team IMO, but I like the AGO spread a lot today.

Team Spirit ML at -300 for 3 units. Spirit are the better team. SKADE could have some individuals step up, but I like Spirit’s teamplay to get the win.

Just a little something to distract you from dinner with your loved one.

Columbia +6 at -115 for 3 units. Columbia are 7-14 ATS this season. Not good. Dartmouth suck at shooting free-throws. Columbia are better at rebounding. Dartmouth does have a better defense, but the Lions shot the best they have all season last time out. Here’s to hoping that carries over. Two bad teams, but it is a small slate tonight and I like this spot. Plus Mike Smith is real good at basketball. Going with the underdog with the best player on the court.

Posting my record here for when I inevitably bet on spring baseball.

If you thought Houston was going to show any remorse for cheating their way to a World Series win. You were wrong. New Yorkers were not happy with the Astros Press conference. Tony in Long Island is no doubt pissed.

“Our opinion is that this didn’t impact the game,” Crane said. “We had a good team. We won the World Series. And we’ll leave it at that.” Crane is the Astros Owner. He ain’t sorry. It deff impacted the game Crane.

Maybe if Bregman had the signs in the Home Run Derby, he would have won one.

Also, where the hell is Rob Manfred?

Leicester City +0.5 at -179 for 5 units. Leicester average over 2 goals a game. Wolves have a solid defense, but they are not in the best form. They have barely been scoring more than a goal a game over their last 5. Harvey Barnes has been in fine form for visiting Leicester. Perez, Vardy, Maddison, Tielemans, and Barnes are enough on offense to break through against Wolves. I expect a first half goal for The Foxes today.

Eintracht Frankfurt +2.5 at -315 for 4 units. Dortmund play some exciting futbol. They score a lot and get scored on a lot. Emre Can said they need to play dirty to have better results. Frankfurt will score enough to keep this one closer than this adjusted spread.

Atletico Madrid at +131 for 3 units. Line has been moving in Atletico’s favor today against Valencia. Valencia just got shitpumped 3-0 by Getafe last time out. Atletico will score today. When I know Atletico will score, I bet them. I trust their defense.

Stat Time: The Tribe won this matchup by 11 earlier this season. W&M have a better ATS record, are better at rebounding, 3-point shooting, and have two 7 footers. William and Mary are 8-2 ATS as an underdog this season. Charleston are 0-4 ATS when revenging a road loss this season. Charleston only have one player over 6 foot 8 that plays major minutes. I had this game as a push. Give me all those points. Vegas hasn’t seemed to have adjusted to William & Mary this year.. The Tribe may make their first NCAA tourney this year.

Old Dominion/North Texas/St Mary’s Money Line Parlay risking 6 units to win 6 units. Texas San Antonio do not shoot as well on the road as at home. ODU are better than their record entails. The Chartway Arena in Norfolk has weird sight-lines for shooters. ODU are favored by a little too much in my eyes, but sometimes you got to zag when you thought about zigging. Shoutout to Ziggy Sobotka. North Texas are better than Middle Tennessee St across my board. No brainer. Same for St Marys tonight against Whale’s Vagina.. I mean San Diego.

This all started because Andre Igoudola’s career is coming to an end and the former Finals MVP wants to play for a contender. He doesn’t have any time to waste basically. Memphis young guys like Ja Morant respond by telling him to move on then.

Steph Curry then went to the gram and posted this picture on his story: 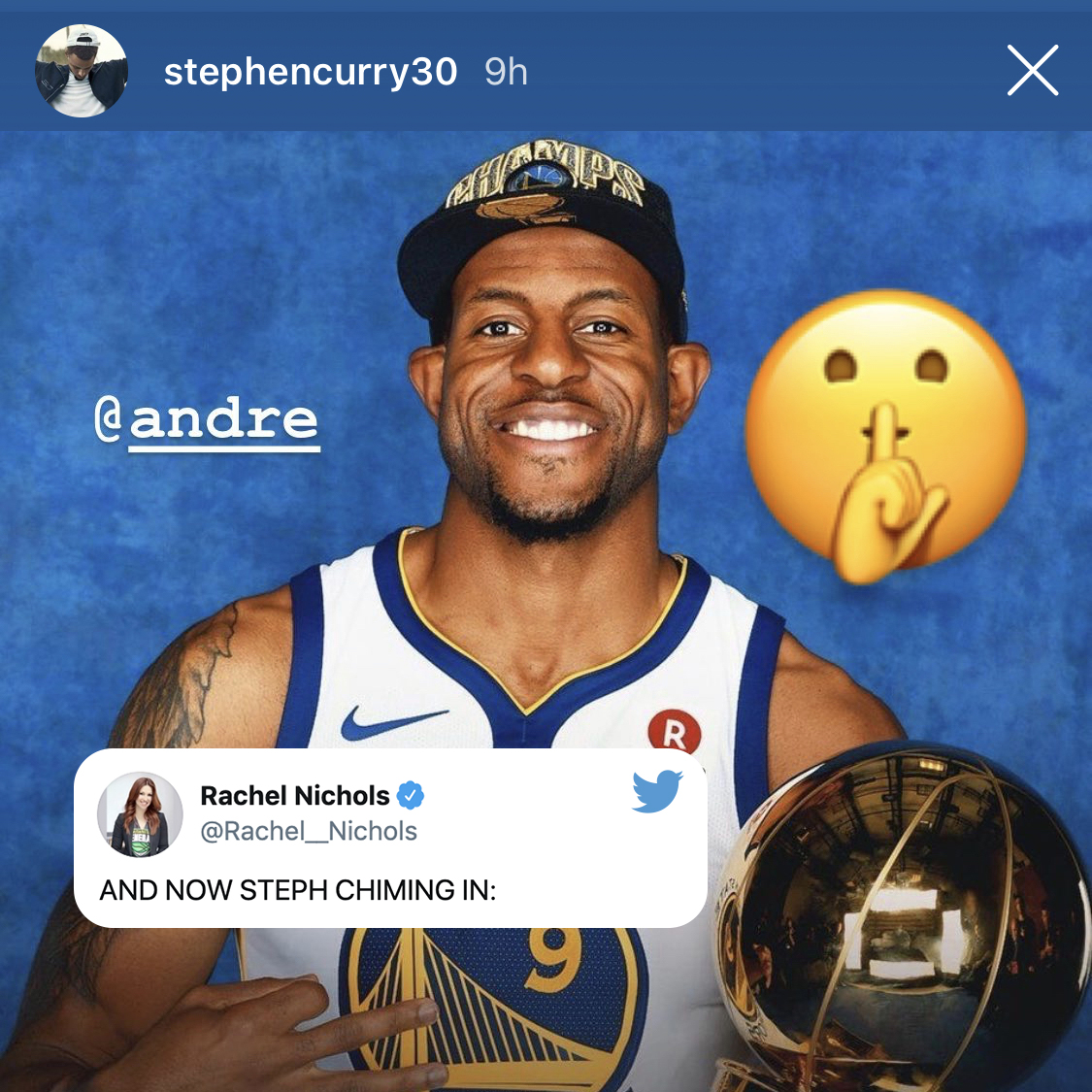 Ja Morant replied with this picture: 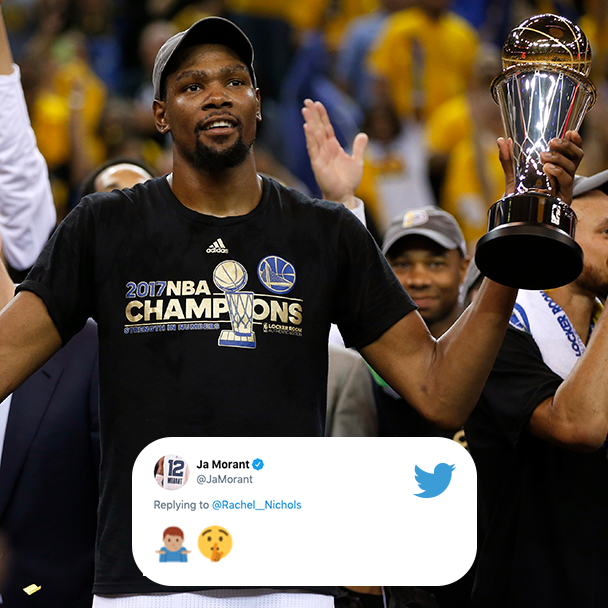 I mean… Ja Morant does have as many Finals MVPs as Steph Curry. KD did help Iggy and Steph tremendously. Iggy had to make sacrifices to win the Finals MVP.

Usually I like to pick the old head’s side, but Ja Morant sticking up for himself and going at Steph Curry is entertaining.

Alabama -5 for 3 units. Alabama has an offense averaging over 80 points a game. Tennessee averages under 67. Tennessee shoots free throws a little better, but that’s about it. Taking the home team to take care of business tonight. Both teams have to win this one to make the NCAA at-large in my eyes.

Auburn +1 for 3 units. Auburn averages 8 more rebounds a game than Arkansas does. Auburn is better on offense. Arkansas is better on defense. Should be a good game.

Boise State -9.5 for 8 units. Wyoming shot 19% from 3 in their +4.5 underdog straight up win against San Jose State last time out. If they shoot that poorly tonight, they will get beat by 20. Wyoming had the advantage inside against San Jose. That won’t be the case tonight. Boise State will win by double-digits on the road against a 6-17 Wyoming team. Boise State won this matchup by 11 earlier in the season, but Boise’s best player, Derrick Alston, was 1-10 and 0-6 from 3 in that one. He will play better tonight. Book it. Bet all the monies.

It has been a fun year in the NFL. From Andrew Luck retiring to Antonio ” No more white women” Brown going crazy to Lamar Jackson’s madden juke abilities to the Browns Brawl. It has been eventful. Here’s to the Patriots not being in the Super Bowl! Real Shame.

My goal was to be up 30 units on the season so I could take a nice little vacation. Well, I am close! Thanks for followin this year. I hope I helped your account as much or more as my own.

My Panthers tanked (prolly inadvertently) better than my Hornets ever have this season. I have been studying mock drafts like it is my job. It is looking like the 7th spot is a good place to be. I will cover all that at a later date..

Now it is Super Bowl Time. Some of my favorite prop bets that I am not betting are:

And last but not least..

Now for the ones I am betting:

Will there be offsetting penalties called? Yes at +170 for 2 units.

Demi Lovato National Anthem over 1 minute and 55 seconds at -220 for 5 units.

Your welcome for these winners. I hope you all have a safe Super Bowl with a lot of alcohol and food.